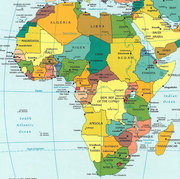 worldwide investment in microfinance forecast to triple to $15 bn by 2015 but will it reach the poorest in the way that Bangladeshi microcredit created this market to end poverty
26 Aug08- Lagos. Nigeria : Remi Babalola, minister of state for finance, Chief Ojo Maduekwe, minister of foreign affairs and Professor Chukwuma Soludo, Governor of Central Bank of Nigeria (CBN) attend Microfinance conference with Muhammad Yunus

Comment by chris macrae on December 8, 2008 at 8:57am
27 oct 07 - from student at clinton school of public service
Yunus inspires hope for africa- Posted by LINDSEY CLARK, Clinton School student - Last week, Clinton School students had the unique opportunity to meet with Muhammad Yunus, founder of the Grameen Bank. Yunus’ efforts in microcredit and poverty reduction earned him the Nobel Peace Prize in 2006.

Starting the bank in 1976 in Bangladesh, Yunus saw credit as a human right and sought to expand this right by offering small loans to start sustainable businesses. Today, the bank has helped 7.5 million people. Of those who have been a part of the program, 64 percent have been able to lift themselves out of poverty.

What is remarkable is that the bank gives loans based on trust, not collateral. This ideology goes against the practices of Western financial institutions but remarkably, 98 percent of the loans are repaid. The vast majority of the loans are given to women because their earnings are more likely going to directly support their families.

Banks modeling the Grameen Bank have spread to all parts of the world including Arkansas. Yunus came in 1986 at the request of then governor Bill Clinton to establish microcredit. What resulted was the Good Faith Fund which is still in existence today.

Places like Africa, where more than 400 million people live on less than a dollar a day, are in dire need of more institutions like the Grameen Bank. Africa lacks the business capital and investors to get the economy going. The World Bank’s 2008 report on Doing Business ranks countries on how easy it would be to establish a business. The report ranked Ghana and Kenya, among other African countries, at number 27, meaning investment is possible in Africa. Unfortunately, many investors and creditors are reluctant to invest in Africa because of rampant corruption and lack of credit. As a result, investment is more likely to come in the form of small, private enterprises and not large, global investment measures. “Africa’s prosperity and stability will not come from dependency on foreign aid but from sustained, productive private investment,” said Shirti Vadera, parliamentary under secretary of state for the UK’s Department of International Development. Yunus’ approach is one successful alternative to large amounts of foreign aid.

“All human beings have unlimited creative potential,” Yunus said. “Once that is unleashed, no one has to be a poor person.” People have the ideas within themselves to bring an end to poverty. We simply must give them the means. This is at the heart of the Grameen Bank. From Bangladesh, to Africa, to Arkansas, we should not be afraid to invest in small acts that can lead to so much.

Comment by chris macrae on December 8, 2008 at 9:01am
From VoicesForAfrica
Muhammad Yunus’s vistion is the total eradication of poverty from the world. 'Grameen', he claims, 'is a message of hope, a programme for putting homelessness and destitution in a museum so that one day our children will visit it and ask how we could have allowed such a terrible thing to go on for so long'. This work is a fundamental rethink on the economic relationship between the rich and the poor, their rights and their obligations. The World Bank recently acknowledged that 'this business approach to the alleviation of poverty has allowed millions of individuals to work their way out of poverty with dignity'.
Credit is the last hope left to those faced with absolute poverty. That is why Muhammad Yunus believes that the right to credit should be recognized as a fundamental human right. It is this struggle and the unique and extraordinary methods he invented to combat human despair that Muhammad Yunus recounts here with humility and conviction. It is also the view of a man familiar with both Eastern and Western cultures — on the failures and potential for good of industrial countries. It is an appeal for action: we must concentrate on promoting the will to survive and the courage to build in the first and most essential element of the economic cycle

RSVP for Africa Decade of Yunus meetings to add comments!